KUALA LUMPUR: With the introduction of the C 600 Sport and C 650 GT today, BMW Group Malaysia now wants to sell you scooters - maxi scooters to be exact.It says that while both scooters are meant for city use, they are just as capable being touring bikes, ready to hit the expressway to, say Ipoh, at a moment's notice.The scooter is a new line of products BMW is selling in Malaysia, and this comes on the heels of the 3 Series and 5 Series hybrids that were launched locally last week.
Both scooters are pitched at women and men as well, with BMW claiming the difference in riding dynamics between a BMW scooter and its bigger displacement motorcycles is minimal.According to BMW, the rationale for bringing in the premium scooter now is that it is becoming increasingly relevant in a rapidly urbanising landscape with all the accompanying ills that it brings such as jams and lack of parking spaces.For Asians with typically smaller build than their Western counterparts, BMW will soon be offering lower-seat versions of the scooters. The seats will be 3cm lower, it said.The C 600 Sport is a sportier product while the C 650 GT is meant for those seeking comfort and touring ability.BMW has designed the C 600 Sport with an emphasis on lightness and streamlined aerodynamics. On the other hand, the C 650 GT - with its big panelling parts - serve to provide better protection against the elements.
Both uses the same 647cc engine with identical performance. Top speed is 175kph, with power relayed through a CVT gearbox.Visually, the face of the new BMW maxi scooters are distinguished by an upside down fork and two-rotor disc brake, just as on a motorcycle. The tails come with a single swing-arm with big hollow wheel axles which are typical of motorcycles from BMW Motorrad.Featuring a 2-cylinder inline engine, the powertrain of the C 600 Sport and C 650 GT is a new design by BMW Motorrad with an output of 60bhp at 7,500rpm and a maximum torque of 66Nm at 6,000rpm. The C 600 Sport can sprint from 0 to 100kph in 7.1s and the BMW C 650 GT in 7.5s.The scooters are fitted with a CAN bus (controller area network) electrical system which networks the instrument cluster, ABS and engine controller as well as the electronic immobiliser and the anti-theft alarm system and tyre pressure control (RDC) which are available as optional equipment. In addition, both feature a power socket installed in the left storage compartment. This can be used to recharge a mobile phone and is connected via Bluetooth to the BMW Motorrad communication system in the rider’s helmet, allowing for convenient and safe communications. The instrument cluster on both presents more functions than other vehicles in its class. It presents a large and readily visible LCD display with integrated engine speed readouts as well as an analogue speedometer with BMW Design Engineers placing an emphasis on best possible legibility under all riding conditions as well the elimination of reflections on the display.  Aside from fuel levels, the instrument cluster also presents, as standard, useful details regarding the scooters oil levels, distance travelled, date and time, average fuel consumption amounts and rate, external temperatures as well as service information regarding the bike itself.As an added boon to touring enthusiasts, the long distance capabilities of the C 650 GT is further reinforced with a spacious 60 litre storage compartment beneath the seat as well as two smallerc ompartments located along the front of the leg well. An additional storage compartment with internal lighting is also fitted in the tail of the C 650 GT and is capable of fitting up to two helmets when stationary. In addition, bulges on either side of the maxi scooter’s tail offer additional stowage space for general utilities.

Both maxi scooters are fitted with a sizeable braking system consisting of a two-rotor disc brake at the front and a single disc brake at the rear with BMW Motorrad ABS. They are also the first maxi scooter models by BMW to feature LED daytime running lights for better passive safety."All BMW Motorrad models from 2013 onwards will be fitted with ABS as a standard feature," said BMW Group Malaysia Motorrad chief Fazli Shukor.He said the first batch of 40 units of the Berlin-made scooters are selling fast, with 25 already spoken for and the rest by tonight when prospective customers are invited to view them.The 2013 target is to sell up to 120 units, said Fazli, adding that he was confident the BMW scooters would become commonplace on Malaysian roads by the third year.The scooters would boost BMW Group Malaysia's bottomline, said BMW Group Malaysia managing director Dr Gerhard Pils.
The company has continued to see "remarkable growth" in 2012, with a total of 5,014 BMW, MINI and BMW Motorrad vehicles delivered across Malaysia as of September, a 14% increase in sales compared to the same period in 2011, he added. The C 600 Sport is selling at RM65,000 while the C 650 GT is going for RM68,800 (OTR without insurance).The C 600 Sport is available in Cosmic Blue Metallic Matt, Titanium Silver Metallic and Sapphire Black Metallic; the  C 650 GT comes in a choice of Sapphire Black Metallic, Platinum Bronze Metallic and Vermillion Red Metallic colours.

Email ThisBlogThis!Share to TwitterShare to FacebookShare to Pinterest
Labels: Announcement and Events 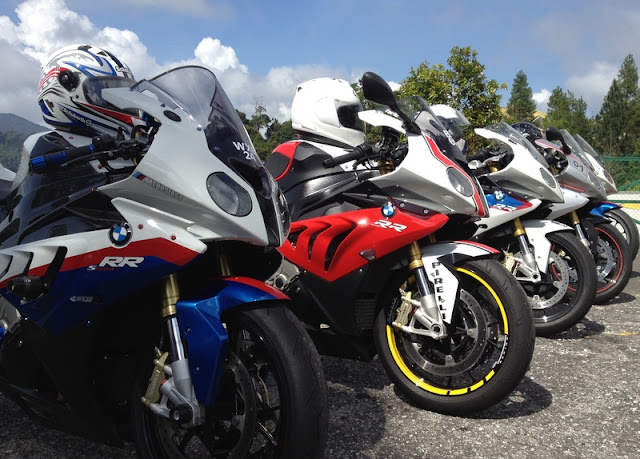 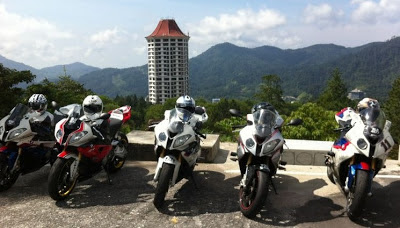 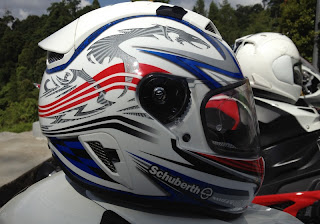 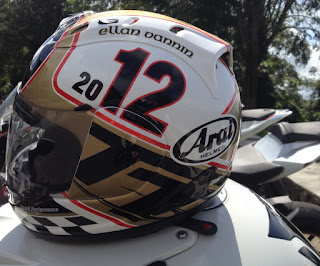 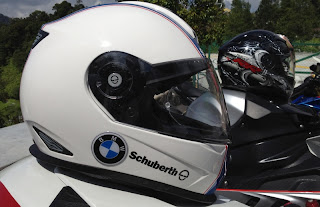 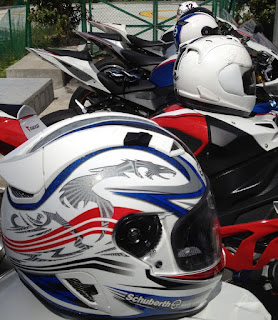 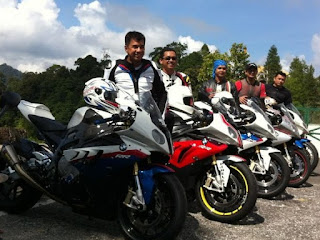 Posted by SBK Motoworks at 9:59 AM No comments:

While we are proud of our hero #63 Zulfahmi Khairuddin, it was Hafizh who cheers the crowd in Moto 2.

Daredevil ride by Hafizh propels him to fourth place

Great ride: Hafizh Syahrin waving to the crowd after finishing fourth in the Moto2 race at the Sepang International Circuit yesterday. — AFP

IT was nothing short of an incredible day as soon after Zulfahmi Khai­ruddin’s first podium celebration, another Malaysian wonderkid gave the packed grandstand plenty to cheer.

Wildcard rider Hafizh Syahrin Abdullah put up an unbelievable ride that propelled him from 27th on the starting grid to fourth at the finish line of the Moto2 race.
It was the best ever finish by a wildcard rider in Moto2 history. Hafizh is also the first Malaysian wildcard rider to score a points finish in history.

Torrential downpour delayed the start by 30 minutes and it was already declared a wet race when Hafizh got off to a perfect start as the lights went off and rocketed to 14th by the third sector of the first lap.
From there, the young rider rode like a daredevil to improve his race position and was already mixing it up with the leading group by the fifth lap.

Rain on Lap 8 created the exact conditions that the Hafizh nicknamed ‘Pescao’ meaning ‘Little Fish’ had been hoping for.


An amazing trio of overtakes saw the young wildcard pushing past Anthony West, weaving past Alex De Angelis and then out-braking Gino Rea to lead the Moto2 race for three full laps.
However, Hafizh had to concede the lead to the top three riders on Lap 13 when tyre degradation began to take its toll and he opted to focus on maintaining his position in fourth spot.
As the storm worsened, race direction was finally forced to red flag the race on Lap 17.
As such, results were taken from Lap 15, which saw Angelis announced as the winner in 36:57.793, West in second place in 36:58.503 and Rea third (36:59.196) ahead of Hafizh (37:00.734).
The 18-year-old’s performance captivated the media in the paddock and he earned 13 points for his hard work, surpassing even Thai Ratthapark Wilairot, who has eight points in his full Moto 2 season.
Hafizh even set the fastest lap of the race, clocking 2:23.707 when he was leading the race.

“I pushed hard, step-by-step, to reach the front group. At the beginning of the race, half the track was dry which allowed me to put in some really quick laps.
“Unfortunately, when the rain came down again, I had no more treads left on my rear tyre and I could do nothing when the full-season riders powered past me.
“In all, I am really happy with my achievement today and I thank my team and my sponsors who have nurtured me so far,” said Hafizh.
Creating new records and smashing old ones is nothing new for the Petronas Raceline Malaysia rider.
Hafizh had been creating waves since he first entered the Malaysian Cub Prix scene at the tender age of 13. He still holds the record as the youngest Cub Prix champion after winning the Novice title in 2009 and the Expert CP130 title in 2010.
He is also the youngest rider to have ever scored a win in the SuperSports 600cc class of the Petronas Asia Road Racing Cham­pion­ship, a feat accomplished last year when he out-raced world-class rider Katsuaki Fujiwara in Qatar.

Posted by SBK Motoworks at 9:27 AM No comments:

All the best to Zulfahmi Khairuddin!


Moto3™ qualifying for the Malaysian Motorcycle Grand Prix in Sepang saw AirAsia-SIC-Ajo’s Zulfahmi Khairuddin clinch a historic maiden-pole position at his home grand prix in a fantastic display ahead of Jonas Folger and Sandro Cortese.

Khairuddin chose the best occasion to score a personal hat trick, consisting of his first-ever GP pole position, being the first Malaysian rider to get pole, and doing so on his 21st birthday. The Malaysian youngster found another gear as qualifying got underway, yet left it until the very last laps to put the hammer down to get pole with the fastest lap of the weekend so far with a 2.13’885

http://www.motogp.com/en/news/2012/malaysian+qp+moto3+khairuddin
Posted by SBK Motoworks at 11:24 PM No comments:

Looking to convert your bike rear tail set only?

We can provide a fibre glass racing rear tail with seat foam. 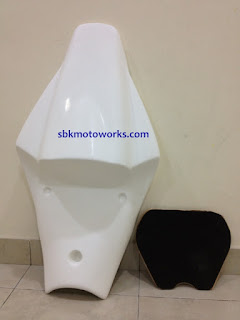 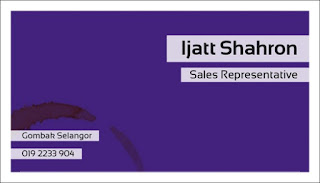 Posted by SBK Motoworks at 2:59 PM No comments: