PETALING JAYA: Zulfahmi Khairuddin closed his breakthrough 2012 season in splendid fashion by clinching third place in a thrilling Moto3 race at the Valencia Grand Prix yesterday.
Zulfahmi rode brilliantly from 17th place on the starting grid to grab his second career podium finish with a stunning overtaking move on the final turn.
In collecting another 16 precious championship points, the AirAsia-SIC-Ajo team rider climbed to seventh in the Moto3 standings with a total haul of 128 points.
The 21-year-old from Banting earned his first career podium by finishing second in the Malaysian Motorcycle Grand Prix in Sepang last month.
Zulfahmi struggled to get the right set-up in qualifying and only managed 17th fastest in the final practice session.
The race began under wet conditions and Zulfahmi went for a cautious approach at the start despite keeping close to the leading group.
He then started to pull off a series of fastest laps and with three laps to go, Zulfahmi moved behind the Red Bull KTM Ajo Racing duo of Sandro Cortese and Danny Kent.
They maintained their positions until the last turn of the final lap 14 when Kent and Zulfahmi made their daring passing moves, overtaking Cortese and Binder respectively to give the Malaysian rider a well deserved podium.
Zulfahmi, in a telephone interview from Valencia, said he had to take a cautious approach due to the wet and slippery conditions.
“I’ve never liked racing on a wet track. I was very careful at the start and just followed the leaders, I saw some riders crashing out, so I was careful until the final stages of the races.
“I took a big risk to fight with the frontrunners on the final turn but it paid dividends.
“I’m so happy to get my second podium of the year, more so after starting 17th on the grid and struggling in the practice sessions earlier.
“Many thanks to the sponsors and everybody who gave me this chance,” said Zulfahmi, who was named the Most Improved Rider for Moto3 last week.
Kent won the race in 45:5.891, crossing the finishing line just 0.056 seconds ahead of world champion Cortese and 0.114 seconds in front of Zulfahmi.
Copy from The Star 12 Nov 2012 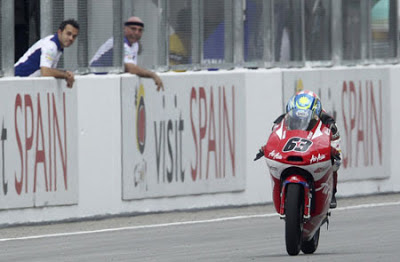